While there is no perfect definitive collection of film adaptations, I thought I’d take another route. Today, I’m offering you an A-Z look at a few films worthy of investigating. From comedy, to animation, to love stories, to fantasy, to musicals, to sci-fi, to western – you’ll find a varied collection here of films based on previous source materials.

revenge, war, and love along an African river.

Big Fish (2003) – The story: Daniel Wallace’s book about the divide between a father and son that can only be repaired by understanding one’s past (and the intersection between truth and lies).

The Color Purple (1985) – The story: Pulitzer Prize-winning novelist Alice Walker offers this story of a young Black woman facing abuse, uncertainty, and a cultural divide in the deep-south during the 1930s.

Die Hard (1988)  –The story: Most people had no idea that this genre-changing action film starring Bruce Willis was actually based on Roderick Thorp’s 1979 thriller “Nothing Lasts Forever.” This sequel to his earlier novel, “The Detective,” involves a terrorist plot, a family reunion, hostages under duress, and a retired NYPD detective willing to take on the villains one by one … and

The English Patient (1996) – The story: Michael Ondaatjes’ 1992 novel is set during World War II, and it focuses on a young Canadian army nurse, her unnamed bed-ridden English patient, and the emotional and physical toll that war can cause on the body, the mind, and the heart.

Forrest Gump (1994) – The story: Winston Groom’s 1986 novel follows the misadventures of this mentally challenged accidental hero from Alabama who travels from football championships, to wartime Vietnam, to shrimp boatin’ mythology, to international fame as a ping pong champion. The real story though is about a simple man with a wealth of wisdom, and a heart full of love for a girl named Jenny.

The Great Gatsby (1926, 1949, 1974, 2013)  – The story: Scott Fitzgerald’s 1925 Jazz Age novel about the impossibility of recapturing the past, was initially a failure. Today, the story of Gatsby’s doomed love, obsession and greed has been the basis of numerous award-winning films.

The Hunchback of Notre Dame (1923, 1939, 1956, 1996 and more) –The story: Victor Hugo’s book from 1831 has been adapted to film over a dozen times. Set in Paris, France during the late-Middle Ages, the story centers around a deformed bell-ringer searching for acceptance and love in a society filled with prejudice and brutality.

Jurassic Park (1993) – The Story: Sometimes when you play with science and start manipulating genetics from past civilizations, you will find that you become lunch for a T-Rex. Michael Crichton’s 1990 novel captured the imagination of readers’ as a dinosaur-infused theme park became the true tourist trap for guests in this sci-fi thriller.

To Kill A Mockingbird (1962) – The Story: Harper Lee’s 1960 Pulitzer Prize-winning tale of lawyer Atticus Finch defending an unjustly accused black man on a rape charge in the 1930s deep South has been the focus for many English Literature curriculums.

L.A. Confidential (1997)  – The Story: James Ellroy’s 1990 neo-noir crime novel focused on political corruption, murder, organized crime, drug dealing, and a deep conspiracy in 1950s Los Angeles. The book was a third installment of the L.A. Quartet series. It was preceded by The Black Dahlia and The Big Nowhere; White Jazz was the final installment.

The Manchurian Candidate (1962, 2004) – The Story: Richard Condon’s 1959 political thriller asked the question: can the son of a prominent U.S. political family be brainwashed and converted into a secret assassin (all without his knowledge)?

No Country For Old Men (2007) – The story: Southern storyteller Cormac McCarthy explores the 1980 U.S.-Mexico drug trade in the Texas back country. Released in 2005, the novel offers rich images of chaos, mayhem, and the lengths to which some will go in pursuit of life choices.

Of Mice and Men (1939, 1982) – The Story: John Steinbeck’s 1937 novella of the economic struggles of migrant workers during the Great Depression offers a look at dreams, ambition, dignity, loneliness and sacrifice. 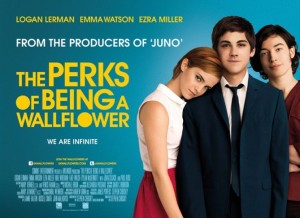 The Perks of Being a Wallflower (2012) – The Story: This 1999 coming of age story of a high school introvert is shared through a series of letters to as anonymous stranger. Writer Stephen Chbosky explores the challenges of growing up and the choices some are faced with during a turbulent and uncertain time in life.

The Quick and the Dead (1995) – The Story: American writer Louis L’Amour penned 89 novels, 14 short-story collections, and two full-length works of nonfiction during his lifetime. The Wild West, outlaws, and lawmen with six-shooters are all you need to know about his truly American tales. Although the 1995 film version shows little resemblance to L’Amour’s original work, it does offer Sharon Stone as a gunslinger seeking revenge for her father’s death, a Russell Crowe American film debut, Leonardo DiCaprio as one evil dude, a script with contributions from Joss Whedon, and direction from Sam Rami.

Road to Perdition (2002) – The Story: This 1998 graphic novel explores family loyalty, morality, and revenge all wrapped up into this crime noir story set in the 1930s Chicago mob scene. Writer Max Allan Collins captures an amazing story of a father and son’s 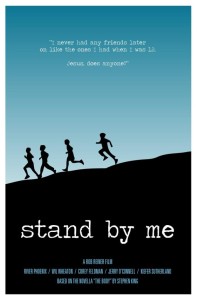 relationship, and the tragic ends that can come from bad choices.

Stand By Me (1986) – The Story: Published as The Body in 1982, this Stephen King novella follows four young friends in 1950’s Maine searching for the body of a dead stranger. Along their journey they discover themselves in the process in this coming of age story. The film version changed dates, and locations, but ultimately stayed true to the message of discovering one’s self.

Tarzan (1984, 1999, 2016) – The Story: Edgar Rice Burroughs wrote 24 adventure novels about a young orphaned infant raised by apes in 1880s Africa. Ultimately the story of Tarzan explores the conflicts of man vs. society. Burroughs released his first Tarzan story in 1912, and adaptations have made it to radio, TV, the stage, and film. It has been adapted to film more than any other except for Bram Stoker’s Dracula (yes you may view a Dracula adaptation as well).

Up in the Air (2009) – The Story: In Walter Kirn’s 2001 novel we explore a world where downsizing and technology intersect, much to the dismay a corporate “downsizing king.” Isolation, detachment, loneliness and searching for one’s real self when many feel you’ve outlived your usefulness all are elements explored in the story.

V for Vendetta (2006) –The Story: When personal and political freedom no longer exists after a devastating war in a future totalitarian England; the lines between good and evil, and right and wrong are not always so easy to see. Alan Moore wrote the 1988 graphic novel series.

The Wonderful Wizard of Oz (1939, 1978, 2005, 2007, 2013, 2015) – The Story: Written in 1900 by L. Frank Baum, the stories of a magical land where wishes and dreams come true have been captured in over 14 original Baum novels. Through musicals, comic books, radio serials, TV shows, and films; the characters and creative madness of witches, munchkins, and enchanted beings have entertained children and adults for over a century.

X-Men: First Class (2011) – The Story: Created by Stan Lee and Jack Kirby in 1963, we discover what happens when you’re different and an outcast. These comic book tales of mutated humans follows a universal storyline of prejudice, fear, control, family, and the thirst for power. 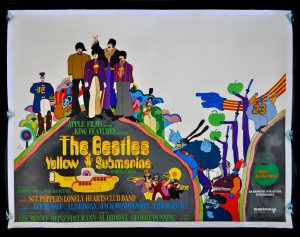 The Yellow Submarine (1968) – The Story: Adapted from the legendary Beatles song of the same name (1966), this psychedelic journey follows four lads searching for a way to save their land from evil invaders. Complete with numerous Beatles tunes and references to lyrics and characters from their songs, this animated film is as unique as it is creative.

Zorro (numerous versions in various languages) – The Story: Created in 1919 by Johnston McCulley, Zorro is a masked figure fighting for the oppressed and righting wrongs for the commoners and locals along the California/Mexico border during the 1820s-1840s Spanish rule. Zorro stories have been adapted to numerous mediums including radio, TV, comics, and films.

*The king of modern day film adaptations is Stephen King; he has had over 75 works translated

into film and 50+ for television (scheduled by 2021) . So how does that compare to the legendary William Shakespeare? Well, Shakespeare only had 26 original works adapted to the screen … but there have been at least 550 film versions where Shakespeare receives partial writing credit.

When reviewing film adaptations, you may wish to explore the list above (or any from the Stephen King or Shakespeare libraries). You may also select from the list of films in the upcoming post: Understanding Adaptations.

So what about you, what are some of your favorite adaptations?

Bausells, M. (2015, March 5). Are these the best book-to-film adaptations? | Books | The Guardian. Retrieved from https://www.theguardian.com/books/booksblog/2015/mar/05/best-book-to-film-adaptations

Follows, S. (2014, April 4). How many movies based on Shakespeare plays are there? Retrieved from https://stephenfollows.com/movies-based-on-shakespeare-plays/

Lusk, D. (2014, October 2). The 16 best and worst book-to-film adaptations in the past 10 years – CBS News. Retrieved from http://www.cbsnews.com/news/book-movie-adaptations-gone-girl-hunger-games-harry-potter-twilight-great-gatsby/